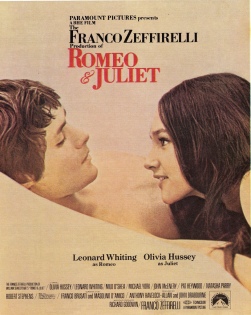 Franco Zeffirelli’s Romeo and Juliet (1968), the most critically acclaimed film adaptation of William Shakespeare’s play, is the tragic story of two teenage lovers whose relationship ends in a double-suicide. Various characters have been blamed for their deaths; however, none can be held directly responsible. The direct cause of Romeo and Juliet’s death is their obsessive love for each other.

Romeo (Leonard Whiting) has an emptiness in his heart that he hopes to fill with romantic love. In his first scene, we see him carrying a flower and pining for Rosaline: “not having that, which having makes [days] short.”1 Later, when he tells Friar Laurence (Milo O’Shea) that he wants to marry Juliet (Olivia Hussey), the Friar asks him: “Is Rosaline that thou didst love so dear, so soon forsaken?”2 Given that Rosaline has taken a vow of chastity, it is understandable that Romeo’s affections would switch to Juliet. But the ease with which he lets go of Rosaline suggests that he was only in love with her beauty.

When Romeo meets Julia, he falls in love at first sight. Upon seeing her he says, “Did my heart love till now? For I ne’er saw true beauty till this night.”3 Not knowing anything of Juliet’s character or personality, his love is based on physical attraction. Romeo’s conception of love is evident to the Friar who says, “Young men’s love … lies not truly in their hearts, but in their eyes.”4 Love at first sight may later become genuine love, but it could also prove to be an illusion. In Romeo and Juliet’s case, no one would dispute that their love for each other is genuine and true. Nonetheless, their initial attraction is based solely on each other’s physical appearance, for they know little of each other’s character. The danger in falling in love at first sight is you may only be in love with how a person looks.

Love at first sight is rooted in a pagan conception of love—the idea of finding your soul-mate who will make you a complete person. According to Greek mythology, human beings originally had four hands, four legs, and a head with two faces. Zeus cut humans in half, and “the innate desire of human beings for each other … draws the two halves of our original nature back together… Each of us is a matching half of a human being … and each of us is looking for his own matching half.”5 Love at first sight is “the striking moment of recognition … the apparent recovery of a perceived loss.”6 Falling in love at first sight is when you recognize your soul mate.

The idea that you can only have one soul-mate has a serious flaw. What happens if your soul-mate is dead? If there is only one person who can complete you, and that person dies, then are you destined to live alone as an incomplete person? After Romeo and Juliet fall in love, they feel whole and complete. Romeo’s belief that he cannot live without Juliet is why he commits suicide. He decides to join her in death so they can be re-united beyond the grave.

As a counterpoint to the soul-mate mythology (in which two incomplete individuals become whole), the biblical definition of marriage is two whole individuals becoming one. When Friar Laurence agrees to marry Romeo and Juliet, he says, “holy church, incorporate two in one.”7 The Friar is alluding to the teaching of Christ: “Therefore a man shall leave his father and his mother and hold fast to his wife, and the two shall become one flesh.”8 The Christian view of romantic love is that although a man and a woman become “one flesh” after they are married, they are still whole individuals when they are apart. Human love is inherently unstable and is often marked by times of division and separation. The biblical view is that romantic love cannot make a person whole. A person becomes whole in their relationship with God, not through an obsessive attachment to another person.

For Romeo and Juliet, romantic love is a substitute for God. The night they first meet, Romeo believes Juliet’s kiss can take away his sin, which from a Christian perspective is something that only Christ can do. He then equates their kiss to hands pressed together in prayer and likens Juliet’s love with the Christian sacrament of baptism, saying to her, “Call me but love, and I’ll be new baptized.”9 Romeo regards Juliet as his spiritual salvation.

Juliet speaks to Romeo in similar terms. After Romeo’s marriage proposal, she tells him, “Swear by thy gracious self, which is the god of my idolatry.”10 By definition, Juliet’s intense love for Romeo is a form of idolatry: “image-worship … paid to any created object.”11 For Juliet, romantic love is her source of spiritual and emotional strength. Before drinking the vial that will put her into a death-like sleep, she kneels in a position of prayer and says, “Love, give me strength.”12 For Juliet, romantic love is her path to completion as a person, a substitute for God’s love.

Romeo and Juliet’s obsessive love for each other is unhealthy. The tragedy of their relationship is that they each lose their independent identity. Unable to live without the other, they take their own lives, and consequently are directly responsible for their own deaths. Their relationship reveals how an obsessive attachment to another person is dangerous. If we make another person our “all”, we may no longer have a reason to live when that person is gone.