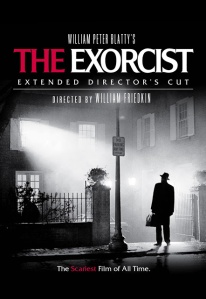 William Friedkin’s The Exorcist (1973) reveals three things that you need in order to perform an exorcism. When a young girl, Regan MacNeil (Linda Blair), is possessed by an evil spirit, two Catholic priests perform an exorcism in order to save her life. The two priests represent two forms of strength: Father Damien Karras (Jason Miller) is physically fit, but he lacks the spiritual authority and faith to cast out the demon. In contrast, Father Merrin (Max von Sydow) has the spiritual authority and faith, but he is too physically frail to complete the ritual.

A second requirement in performing an exorcism is faith. Although Christ gave his disciples spiritual authority over demons, they were unable to cast a demon out of a young boy because of their lack of faith: “Then the disciples came to Jesus privately and said, ‘Why could we not cast it out?’ He said to them, ‘Because of your little faith'” Matthew 17:19-20 (ESV).  Karras does not have the faith to cast out the demon inside Regan. Early in the film, he says, “There isn’t a day in my life that I don’t feel like a fraud.” He later tells Father Dyer (William O’Malley), “I think I’ve lost my faith.” When Karras takes part in the exorcism, he is fearful and anxious—the opposite of faith. In fact, in one scene, he is so overwhelmed that he cannot speak, and later, during an emotional breakdown, Merrin orders him to leave the room. Unlike Karras, Merrin is bold, confident, and unafraid as he rebukes the demon inside Regan, commanding it to come out: “The power of Christ compels you!” He has an unwavering faith that the demon can be driven from Regan’s body.

A third requirement in performing an exorcism is prayer. After Christ rebuked his disciples for their lack of faith, he told them, “But this kind never comes out except by prayer and fasting” Matthew 17:20 (ESV). Merrin is too physically frail to fast, but he is a man of prayer. Before entering Regan’s bedroom, he takes time to pray and begins the exorcism by reciting the Lord’s Prayer. Karras, in contrast, does not pray before entering the bedroom, relying solely on Merrin’s spiritual strength. Karras is only there to physically assist the elder priest, cleaning up vomit and monitoring Regan’s health. Lacking an intimate relationship with God, he is ill-equipped to drive the demon from Regan’s body.

Three things are needed to perform an exorcism: spiritual authority, faith, and prayer. There is, however, a fourth requirement. Father Merrin is unable to drive the demon out of Regan because he is not physically healthy enough to endure the ritual. He dies before the exorcism can be completed. Father Karras, who is physically fit (a boxer and a runner), saves Regan’s life by making a desperate plea with the demon: “Take me. Come into me.” By offering his body in exchange for Regan’s, Karras fulfills the commandment of Christ: “Greater love has no one than this, that someone lay down his life for his friends” John 15:13 (ESV).