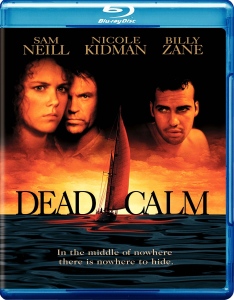 If the actors in Phillip Noyce’s Dead Calm (1989) are the same age as the characters that they play, then John Ingram (Sam Neill) is 20 years older than his wife Rae (Nicole Kidman). (Kidman was 21, and Neill was 41 when the film was released.) An examination of Sam Neill’s character reveals three reasons why young women fall in love with older men: John has emotional maturity, a successful career, and most importantly, loves Rae, and is completely devoted to her.

John has emotional maturity and strength. After the death of their son in a car accident, Rae is filled with grief and suffers night terrors on the yacht. John comforts her, but instead of looking to the past, he points to the future, suggesting that they can have another child. Later, when he leaves the yacht to investigate the boat abandoned by Hughie Warriner (Billy Zane), he gently commands her to use the gun for protection: “Just do as I say, please.” Rae is attracted to John because he is strong and decisive in times of crisis.

Although John supplies Rae with emotional strength, he is not there for her when she needs him the most. When he leaves the yacht to investigate Hughie’s boat, his absence allows her to grow and change. Without John to protect her, she shows great strength and determination, outwitting Hughie and getting him off the yacht. Then she searches for her husband and rescues him, a sudden reversal of their gender roles. Before John left the yacht, he was the dominant male, but Rae becomes his equal.

A second reason Rae is attracted to John is because he can financially provide for her. A captain in the Australian Royal Navy, his salary allowed Rae to be a stay-at-home mother. Not all women want a man to provide for them, but if a woman wants to raise a child while staying at home, she needs financial support. With a successful career, John can take care of Rae if she decides to have another child. For a man Rae’s own age, this is not always possible. Older men usually have more work experience than younger men, and consequently, often earn more money.

Financial stability and emotional maturity are important factors in building a marriage, but the most essential factor is love. When John and Rae are re-united, he presses his face to her chest, and for the first time, his eyes are filled with tears. The next morning, he shampoos her hair and makes her breakfast, small actions that demonstrate his love for her. Rae feels safe and secure in her marriage because she knows that John loves her and will never leave her.

In contrast to John, Hughie represents the negative qualities that young men sometimes possess. A year older than Rae, he is physically attractive, but he lacks emotional maturity. From the moment he arrives on the yacht, he is a man of emotional extremes. He has frequent mood swings, marked by fear, anxiety, paranoia, elation, and rage. While John is a protector, motivated by love, Hughie is a killer, driven by lust. His devalues women, physically abusing Rae, and he tries to seduce her even though she is married. For Hughie, women are objects to be used for sexual gratification.

Whether young or old, men are not equal in their character traits, each man possessing a different mixture of positive and negative qualities. If a young woman has a negative relationship with a man her own age (or a series of such relationships), it is not surprising why she might fall in love with a man who is much older. Older men may not have the same good looks, but having lived longer and learned the lessons of life, they may have more good qualities.

My Free eBook ⇒ The Donkey King and Other Stories