Skip to content
A young wolf believes that he is a sheep trapped inside a wolf's body. 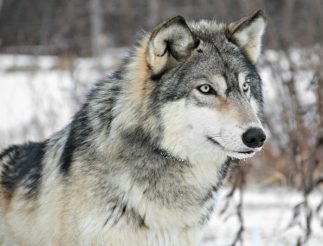 One cold winter night, a young wolf joined his pack on a hunt, and the wolves attacked a band of bighorn sheep.

The pup stood by, watching the slaughter of two old ewes, and when it was over, the wolves ate until their bellies were full.

After the pack returned to their den, the young wolf was so disturbed by the deaths that he howled all night long.

The next morning, he told his father: “I’m not eating sheep anymore, or any other animal.”

His father, who was the Alpha male of the pack, laughed at him. “What are you going to eat?”

His father scoffed. “What are you? A sheep?”

And so, the young wolf dug deep in the snow and found grass to eat.

A week later, the Alpha male said to his son: “You can’t stay in the den tonight. You have to join me on the hunt.”

The young wolf shook his head. “I’m not a killer.”

“You’re coming with me,” his father said sternly, “or you’ll embarrass me before the pack.”

The young wolf went with his father, and watched the pack attack another band of bighorn sheep, killing two old rams. But when the wolves ate, he refused to eat with them and turned his head away.

That night, he had a realization. He kept it a secret until spring arrived; then one morning, he told his father: “I’m a sheep living inside a wolf’s body.”

His father frowned. “That’s the stupidest thing I’ve ever heard.”

“Believing something is true doesn’t make it true.”

The Alpha male growled at his son. “If you’re not a wolf, then go live with the sheep!”

“Is that what you really want?” the young wolf asked sadly.

“Yes, you’re banished. You’re no longer a member of this pack!”

The Alpha male was so angry, he mocked his son before the other wolves, saying, “My son is crazy! He thinks he’s a sheep!”

The young wolf looked at his father, then left the den. As he walked away, all the wolves laughed and howled at him.

The young wolf wandered for many days until he found a band of bighorn sheep. The band, comprised of ewes, yearlings, and lambs, ran away in fear, but he quickly caught up with them.

“I’m not going to hurt you,” he promised. “I’m a sheep like you. I’m just trapped inside a wolf’s body.”

The sheep stared at him; then they looked at each other.

“It’s a trick!” one of the ewes finally said.

A yearling cried, “He’ll eat us all!”

“No, I only eat grass,” the wolf declared. “I’ve never killed a sheep in my life.”

Hearing this, the sheep didn’t know what to think, but they didn’t run away. And so, the wolf joined their band, and ate junegrass and wheatgrass like they did.

The wolf and the bighorn sheep lived in peace until early fall when two rams joined the band.

“Leave us! Now!” the larger ram commanded the wolf.

“He’s a nice wolf,” another ewe said. “I mean, a nice sheep living inside a wolf’s body.”

“Nature made you what you are,” the smaller ram added.

The wolf tried to persuade the rams, yet no matter what he said, they would not believe him.

That night, the two rams waited until the wolf was asleep; then they attacked him, ramming him in the head with their spiralled horns.

The wolf woke up and fought both rams, wounding them with his sharp teeth. The rams fell to the ground, and the wolf stood over them.

The larger ram said, “I was right… You’re not a sheep.”

“No, I have the soul of a sheep,” the wolf replied. “But I can defend myself, for I have the strength and power of a wolf.”

And after that, the rams never attacked the wolf again.

If you like this story, it was published in my eBook.