Skip to content
Interpreted allegorically, the film is a warning against the dangers of casual and pre-marital sex with the monster representing a sexually transmitted disease. 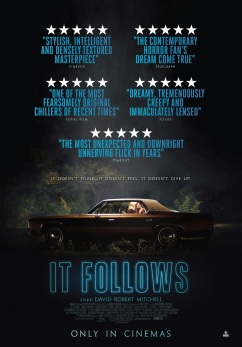 In David Robert Mitchell’s It Follows (2014), Jay (Maika Monroe) goes on a date with Hugh (Jake Weary), and after they have sex, a monster starts following her. Interpreted allegorically, the film is a warning against the dangers of casual and premarital sex with the monster representing a sexually transmitted disease.

The film can be interpreted allegorically with the monster representing a sexually transmitted disease (STD). Hugh says “It” started following him after a “one night stand.” Like an STD, the monster can only harm people who have casual or premarital sex. Two virgins who get married would never be in any danger from “It.” The monster punishes people who engage in risky sexual behavior.

Casual sex is risky behavior because you might get an STD. Despite the possible consequences, the percentage of young people engaging in casual sex is increasing. A 2014 study found that “35% of GenX’ers in the late 1980s had sex with a casual date or pickup (44% of men, 19% of women), compared to 45% of Millennials in the 2010s (55% of men, 31% of women).”1 The increase in casual sex has led to STD rates reaching a record high in the United States.2 In 2015, there were over 1.5 million reported cases chlamydia, 395,216 cases of gonorrhea, and 23,872 cases of syphilis, with most of the infections among people ages 15 to 24.3 Millions of Millennials have been infected with STDs because of their sexual promiscuity.

Although STDs can often be prevented through the use of condoms, the only safe sex is between two people who are married or in a monogamous relationship. Unlike casual sex (which is usually spontaneous), you can delay having sex until you both go to a doctor and make sure neither partner has an STD. Making sure your partner has a clean bill of health before having sex is the responsible thing to do. It could save you from a life of suffering, and possibly even death.

In It Follows, Jay nearly dies because she had sex with Hugh. She didn’t know his sexual history, and suffers the consequences of her unlucky choice. In the climax of the film, Jay and her friends try to destroy the monster. Unfortunately, with STDS this is not always possible. While many STDs can be treated and cured, others will never go away.4