A fable about war and pacifism. 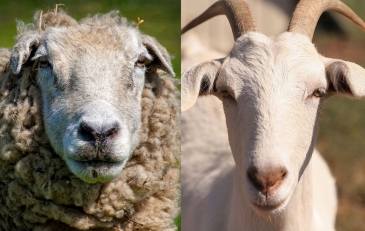 A goat herder bought 50 goats, and he raised them in a field. But he was mean and cruel, and enjoyed yelling at them, and chasing them. Then one evening, he forgot to lock the gate, and when he came back the next morning, the goats were gone!

The goats had fled to a grassy plain where they could graze. They enjoyed their freedom and had plenty to eat. However, one morning, when the goats woke up, they saw a wolf eating a member of their herd. Night after night, they wondered which goat he would eat next.

A nanny goat decided to do something about the wolf. She waited until sunrise when the wolf went to sleep; then she tip-toed away, and walked for a week until she came to a flock of sheep.

“A wolf has attacked my herd,” the nanny goat said to the sheep. “Can you send your strongest and bravest rams to help us?”

The sheep, both ewes and rams, all replied, “We are peaceful sheep and don’t believe in fighting. But if any goats want to come and live with us, they are welcome here.”

The nanny goat pleaded with the sheep, yet no matter what she said, they would not change their minds, so she kicked the ground and left them.

When the nanny goat returned home, to her great surprise, the young billy goats had grown horns.

That night, she gathered the billy goats together, and they rammed the wolf in the head until he dropped dead.

Several days later, a ewe lamb came to the goats and said, “A pack of wolves has attacked our flock. Can you send your strongest and bravest billy goats to help us?”

The billy goats shook their heads. “No, it’s not our fight,” they said.

The nanny goat reminded the ewe lamb: “None of your rams came when we needed help.”

Day after day, the ewe lamb pleaded with the goats, yet no matter what she said, she could not change their minds, so she kicked the ground and left them.

When the ewe lamb returned home, she bleated and cried. The wolves were gone, and all that remained of her flock was bits of wool and scattered bones.

If you like this story, it was published in my eBook.