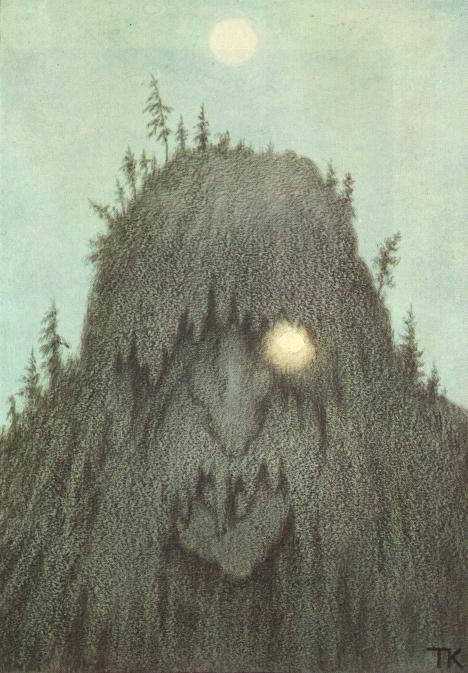 A fable about war and peace. 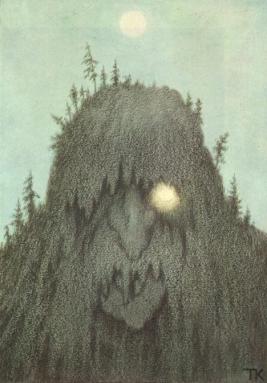 Long ago, a troll lived in a cave on a mountain. He had a head shaped like a pumpkin, a nose like a banana, skin as hard as a rock, and he was ten feet tall. His name was Thug, and he loved one thing more than anything else: He loved trees.

After the sun went down, Thug came out of his cave and talked to the trees. He ate the acorns on the oak trees and said, “You make me feel smart.”

Thug didn’t have a friend in the world, but he treated the trees on his mountain like friends.

If a tree had any dead branches, he pruned it by biting the branches off with his teeth. If a tree looked unhealthy, he peed on it to give it nutrients to grow. And if he felt lonely, he hugged a tree and didn’t let go until sunrise, when he went back to his cave to sleep.

Many miles from Thug’s mountain, there was a kingdom ruled by a man named Greybeard. The king had long grey hair, a long grey beard, and he wore a grey robe and a silver crown. When he needed to think, he sat on his throne and pulled on his beard.

King Greybeard felt sad because his people were poor. His land was barren, and the people barely grew enough crops to survive. But one day, he was sitting on his throne when he had an idea.

He summoned Simon, his Right Hand who carried out his orders and gave him counsel. Simon was a bald man, 20 years younger than the king.

King Greybeard ordered him: “Send men to Troll Mountain, and cut down the trees. Pay the men well, so they can provide for their families. We will trade the wood with other kingdoms, and increase our store of gold. I will make my kingdom prosperous again.”

But Simon reminded him: “Many men have gone to cut down the trees, but none have returned. It is said a troll lives on the mountain, and he eats men.”

King Greybeard scoffed. “The troll is a myth. Do as I have commanded.”

And so, Simon sent 50 men to Troll Mountain. After they arrived, they worked until sunset, cutting down many tall trees: oak, birch, and pine.

When Thug woke up, he came down the mountain, and to his horror, dozens of his trees had been chopped down.

He fell to his knees and wept. Then he said, “Men kill my trees. I will make them pay for what they have done.”

Thug returned to his cave and picked up his hammer. His hammer was huge—twice the size of his head. He waited until midnight; then he came down the mountain and smashed all the logger’s tents while they were sleeping. However, one logger managed to escape.

The following morning, the logger appeared before King Greybeard, and told him what the troll had done. The king was greatly dismayed.

Soon after, the families of the dead loggers gathered outside the castle, and demanded that the king kill the troll.

“You must destroy the troll.”

King Greybeard shook his head. “I do not want war. If we attack him, many more men will die.”

“If you do not attack the troll, he will surely attack us. It is better that we fight him on the mountain before he comes here.”

King Greybeard thought it over, and pulled on his long grey beard. Finally, he said, “No, we provoked him by cutting down his trees. He killed the loggers to deter us from coming back. If we leave him be, he will leave us alone.”

A year went by, and the troll did not attack as Simon predicted. However, there was a drought, and the people became even more destitute.

Every day, hundreds gathered outside the castle and demanded bread to eat.

“Buy the people bread. You have plenty of gold.”

“No,” King Greybeard said, clenching his fist. “If I give them bread, they will become dependent on it. The people must create their own wealth. I only spend my gold for the defense of the kingdom, and to build roads and bridges.”

Simon thought for a moment, and then he said, “Troll Mountain has the best trees in the land. “They are by right your trees, for you are a king and can take whatever you want. Put men to work cutting down the trees, but also send your army to protect them. The troll will not attack an entire army.”

King Greybeard nodded his head and smiled. “It is a good plan. Carry it out.”

And so, Simon sent 50 more loggers to cut down the trees on Troll Mountain, and he also sent the king’s army of 100 men to protect them.

When Thug woke up, he came down the mountain, and to his horror, he saw that many more of his trees had been axed.

He fell to his knees and pounded his fists on the ground. Then he chomped his teeth and said, “Men have no respect for my trees. I will make them pay, so they will never cut down my trees again.”

Thug returned to his cave and got his battle axe. It was massive, twice as big as his torso, and sharper than any sword. He waited until midnight; then he attacked the king’s army. The soldiers fired arrows, but the troll’s rock-like skin was too hard, and the arrows fell to the ground. Thug killed every man with his axe, chopping off their heads, or cutting them in two.

As the loggers came out of their tents, Thug stomped on them or strangled them; however, half of the men escaped.

The next morning, when word reached King Greybeard that half of the loggers and all the men in his army were dead, he was filled with great sorrow.

Soon after, the families of the dead gathered outside the castle and demanded that the king go to war with the troll.

“You must raise another army. And you must destroy the troll.”

King Greybeard thought for a long while, and tugged on his long grey beard. Finally, he said, “Raise an army. But do not attack the troll. He slaughtered our army to deter us from cutting down his trees. If we leave him be, he will leave us alone.”

But Simon shook his head. “If you do nothing, the troll will see it as weakness. You must kill him before he attacks us. You must protect your people!”

“These are my orders,” King Greybeard said firmly. “Follow them!”

Simon did as the king commanded. He raised a new army to defend the kingdom, but he didn’t attack the troll.

Another year went by, and there was another drought. The people became even more hopeless. Hundreds gathered outside the castle and demanded bread. They demanded justice for the dead loggers and soldiers. Finally, they demanded that if the king could not give them what they wanted, he should abdicate his throne.

Simon scratched his head, and then he said, “If you do nothing, the people will rebel against you. Therefore, you must send your army to destroy the troll. When the troll is dead, you can cut down the trees. Your people will no longer be poor.”

King Greybeard sighed. “Many men will die, but I see no other choice. Send the army.”

Simon sent the army to Troll Mountain, but Thug was ready for them. After the sun went down, he ran down the mountain with his battle axe in one hand, and his hammer in the other, and he smashed half of the soldiers with his hammer, and the rest he beheaded with his axe.

After slaughtering the entire army, Thug went to the king’s castle and stood outside the defensive wall.

“I demand your king come out!” he thundered.

King Greybeard and Simon came to the balcony and saw the troll standing beyond the wall.

Thug raised his hammer and yelled, “I am Thug! You cut down many of my trees, but you will not cut down any more!”

Thug struck the wall many times until he made a hole in it. And then he stepped through the hole, walked to the castle, and stood below the balcony.

King Greybeard was trembling. “Great and mighty Thug! Have mercy on my people. It was I who ordered men to cut down your trees. Do not punish them because of me.”

Thug said sadly, “You killed many of my friends.”

“Friends? We killed no one.”

“The trees are my friends. You destroyed them!”

King Greybeard put his hands together and pleaded, “I promise you, I will never send any men to your mountain again.”

Thug stared at the king, and scratched his head. And then he said, “I will make sure of that.”

Thug smashed his hammer against the castle, cracking the foundation, and then he smashed it again and again.

Simon left and did as the king commanded. Then Greybeard tried to reason with the troll.

The troll went on smashing and cracking the castle until the foundation was destroyed, and when the balcony fell, King Greybeard was buried in the rubble.

Victorious, Thug raised his hammer in the air and roared. Then he turned and trudged back to his mountain.

After the troll was gone, the people gathered outside the ruined castle, and mourned for King Greybeard. He had saved their lives by sacrificing himself.

The king, who had no sons or daughters, had named Simon his heir, and he was crowned king.

With Greybeard’s store of gold, Simon bought the people bread. And because he was generous, the people loved him.

The troll would destroy them all. And because of that, there was no more war.