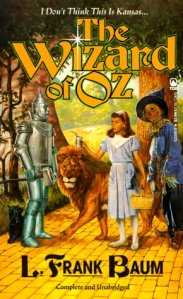 In L. Frank Baum’s novel, The Wizard of Oz, everyone looks to the Wizard to meet their needs. This is ironic because the Wizard cannot meet anyone’s needs. He is an illusionist, a pretender, and a trickster. Baum’s novel can be read as an allegory: Dorothy and her friends represent people who look to the state to solve their problems for them, while the Wizard represents an all-powerful ruler who appears to have all the answers, but in reality does not.

Everyone has illusions about the Wizard. The Witch of the North calls him “the Great Wizard” who is “more powerful than the rest of us together” (12). The farmer says he “can take on any form he wishes” (76). The Wizard has no special powers, and he cannot change form. He is a pretender: someone “who makes a false show.”1 To Dorothy and her friends, he appears as “an enormous head” (87), a “lovely lady” (91), a “terrible Beast” (93), and a “Ball of Fire” (94). They are fooled by the Wizard because he is a master of illusion. He deceives people not only with false appearances, but also by keeping his distance from them. The farmer says, “the Great Wizard does not like to see anyone” (77). This is because the more people who see him, the greater the chance that someone will discover he is an illusionist.

The Wizard creates illusions not only about himself but also the Emerald City he rules. When Dorothy and her friends meet the Guardian of the Gates, he tells them, “you must put on the spectacles” (79). These green-tinted glasses distort people’s perception of reality. While wearing them, Dorothy is “dazzled by the brilliancy of the wonderful city” (82) because the spectacles create the illusion that everything in the city is green. The color green suggests life and the growth of the natural world. Although the people “seemed happy and contented and prosperous” (83), the appearance of something is not always the reality. The Wizard has given the people the illusion that their city is glorious and prosperous.

The Wizard deceives Dorothy and her friends, taking advantage of their deepest desires. Dorothy asks him to send her back to Kansas; the Scarecrow asks him to “put brains in [his] head instead of straw” (92); the Tin Woodman asks for “a heart that [he] may be as other men” (93); and the Lion asks for courage so that he can “become the King of Beasts” (95). The Wizard promises to grant their requests if they will do one thing for him: kill the Wicked Witch of the West. Dorothy and her friends agree to his terms and become a band of assassins. The Wizard manipulates them with false promises in order to have his enemy destroyed.

When Dorothy and her friends return to the Emerald City to deliver the news that the Witch is dead, the Wizard’s screen of appearances is finally uncovered. They discover he is a little old man with “no magical powers at all” (138). The irony is that Dorothy and her friends do not need the Wizard for anything—they possess the power themselves to change. The Wizard recognizes this, telling the Scarecrow: “experience is the only thing that will bring knowledge,” and to the Lion: “courage is facing danger when you are afraid, and that kind of courage you have” (139). Dorothy’s friends, however, do not have ears to hear. Despite the Wizard admitting, “I cannot keep my promises” (139), the Scarecrow and the Tin Woodman sill insist that he help them. Dorothy’s friends put their hope in a Wizard who only has the power of good advice.

Unhealthy dependency arises when we have no confidence in ourselves, and we look to other people to solve all our problems. The dependency that Dorothy and her friends have on each other is healthy, serving one another in love; however, their dependency on a Wizard to solve their problems for them is not healthy. At first, Dorothy believes the Wizard is her only hope in getting home to Kansas, but she eventually learns that she can get there on her own.