Skip to content
During a psychotic episode, a person will "have trouble distinguishing between what is real and what is not." 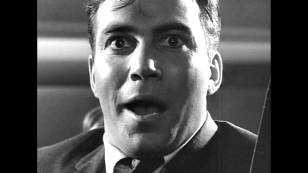 In the backstory to “Nightmare at 20,000 Feet”, Bob Wilson (William Shatner) had a nervous breakdown during an airplane flight and was sent to a sanitarium to recover. The story begins six months later with Bob and wife Julia (Christine White) boarding an airliner to take another flight. The plot is marked by situational irony: A man who appears to be having a psychotic episode has an accurate perception of reality.

During a psychotic episode, a person will “have trouble distinguishing between what is real and what is not.”1 This can include hallucinations in which they “hear, see, smell, taste, or feel something that is not actually there.”2 Hallucinations can be preceded by “early warning signs” including feeling “anxious, tense, irritable, or depressed.”3

Bob is in a depressed and anxious mood, which could be an early warning sign of a psychotic episode. When he is seated next to the auxiliary exit, he tries to calm himself. Later, when the flight attendant closes the door, he looks back with alarm. As he talks to Julia about his time in the sanitarium, he is sad and expresses low self-esteem, telling her that everything is intact except him.

In his depressed and anxious state, Bob appears to have a hallucination: He sees a gremlin on the wing of the plane, “tampering with the engines” and lifting the “cowling plates.” However, no else sees the creature, and no one believes his story. This creates a dramatic question for the viewer: Is he hallucinating, or is the gremlin real?

Whether or not the gremlin is real, Bob is in a no-win situation: If the gremlin is real, it might crash the plane, and everyone will die; but if he is hallucinating, he will have to return to the sanitarium, and this will put a further strain on his marriage and family. In the climax of the episode, Bob decides to trust his perception of reality. He steals a gun and shoots the gremlin.

In the final scene, the dramatic question is finally answered. Rod Serling, as narrator, says there is often “tangible proof” after one has entered the Twilight Zone. The evidence of the damaged wing proves that Bob was not hallucinating. The gremlin was real.

The gremlin is more than a physical creature. With its ability to defy the laws of gravity—jumping on and off the wing of the plane—it is supernatural. The episode shows how people who claim to perceive a supernatural reality are often viewed as crazy.