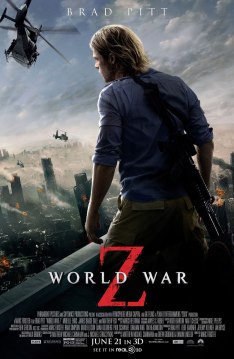 Knowledge is the first key to solving any problem. When Gerry visits South Korea, Israel, and the U.K., he increases his knowledge about the zombie plague by talking to soldiers, doctors, and other people in authority. Doctor Andrew Fassbach (Elyes Gabel) tells him that Mother Nature “loves disguising her weaknesses as strengths.” Gerry uses Fassbach’s insight to determine if the zombies have a hidden weakness.

Although Gerry depends on knowledgeable people to find answers, he also trusts his own judgement. To find a way to stop the zombies from infecting more people, he practices independent thinking: “the process of making sense of the world based on your own observations and experiences.”1 After watching an old man and a young boy survive a zombie attack, he develops a theory that zombies do not attack people who are terminally ill. Through careful observation and logical reasoning, Gerry discovers something that the experts do not know.

Gerry has another quality that is essential in problem solving: determination. At a W.H.O. research facility, he meets two doctors (Peter Capaldi and Pierfrancesco Favino) who appear hopeless and defeated. Gerry, however, is determined to save his family, so he injects himself with a deadly pathogen to test his theory about the zombies. Gerry is a problem solver because he is determined to find a solution, and willing to take risks.

In World War Z, none of the medical experts are able to find a cure for the zombie plague. Gerry, a non-expert, discovers a way to “camouflage” people from the zombies. He finds a solution by doing what zombies cannot do: by using the power of his mind. More importantly, he does not give up in trying to find a solution. You can have access to knowledge, and be capable of independent thinking, but without determination, difficult problems cannot be solved.