Skip to content
A story about good luck versus bad luck. 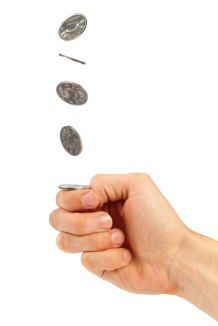 George Stone lived in a small town in British Columbia. The year was 1964.

George never felt lucky. In high school, he fell asleep in bed while smoking a cigarette, and his parents’ house burned down. He made the junior hockey team, but he broke his neck during a playoff game. And once, when he went hunting, he ran out of bullets and got attacked by a bear.

After he graduated from high school, George worked for a butcher, but one day his boss said, “I’m going out of business.”

Although George applied everywhere, he couldn’t find another job, so he moved back in with his parents.

Not long after that, his girlfriend told him, “I don’t want to be with you anymore.” And she left him for another guy.

George didn’t know what to do. His father told him, “You need to move to a big city. There’s nothing here for you.”

The next morning, George said goodbye to his father and mother, put his suitcase in his car, and drove away.

When he reached the highway, he couldn’t decide which way to go. He planned to drive west, to Vancouver, but he thought about driving east, to Calgary, Alberta. So he pulled over on the side of the road, reached in his pocket, and took out a coin.

If I flip heads, he thought to himself, I’ll go east. If I flip tails, I’ll go west.

George flipped heads and drove east. Within a week, he got a job in a meat packing plant. Not long after that, he met a girl, and fell in love. Her name was Grace, and she was in grade 12. The summer after she graduated from high school, they got married.

For their honeymoon, George and Grace drove to Vancouver. They stayed in a hotel, and had a great time, swimming and sunbathing, but on their final night they had a big fight.

George said, “Honey, when we go home, I really think you should get a job.”

“But we can’t put a down payment on a house if you don’t work.”

Grace was irate. “We talked about this before we got married!”

“But you’re not pregnant yet, so you should work. You got good grades in high school, and you’re beautiful, so you could easily get a job.”

Grace glared at George. “I know why you want me to work. You don’t want to have children!”

Then she started crying and throwing things at George.

George didn’t think it was right to throw things at his wife, so he threw his wedding ring at the wall, and went to a pub. He sat at the bar and ordered a drink.

An hour later, when he was on his third drink, a young woman sat beside him. He looked at her; she looked at him, and he felt attracted to her.

Gwen was a stewardess, and she had a zest for life. She told George about all the cities around the world she had been to, and they had a great time. But two hours later, George remembered Grace.

“Will I see you again?” Gwen asked.

George shook her hand. “Goodbye, Gwen. I hope you have a really great life.”

And then he left the pub.

Standing outside in the parking lot, he looked back and thought, “If I flipped tails instead of heads, I wonder if I would have met Gwen. I might have married her.”

“I’ve been doing some thinking,” she said excitedly, “and I have an idea!”

George smiled. “What is it?”

“One day, when our children are older, I want to become a nurse.”

George thought for a moment and said, “I think that’s a really good plan.”

Six years later, when the boys were in grade one, Grace went to university, and she became a nurse. Then George and Grace bought a big house with a big backyard.

One morning, Grace came home from working night shift at the hospital, and she looked upset. George was in the kitchen, washing the previous night’s dishes.

“A woman was brought in last night,” she said sadly. “A stewardess. After her plane landed, she took a taxi, and it went over the bridge. The doctor tried to save her, but…”

George was curious. “What was her name?”

George remembered her vividly. He finally told Grace how he met her on their honeymoon.

Grace looked worried. “Did you… ?”

“She could have been me,” Grace said, and she burst into tears. “She had two young girls.”

“Yes, she could have,” George said, holding her in his arms. “But she wasn’t you.”

Although George felt sad for Gwen, he was glad that he married Grace. He looked at her and loved her like the day they first met.

“Before I met you,” George said, “I always felt unlucky, but now I know that what seemed like bad luck was actually good luck. I really am a lucky man.”

Grace smiled. “Yes, you definitely are.”

“Can we go to Las Vegas again this year?” George asked.

“No, definitely not!” Grace laughed. “You had no luck at all.”

My Free eBook ⇒ The Donkey King and Other Stories