Skip to content
An economics fable. Inspired by Aesop's fable, The Goose that Laid the Golden Egg. 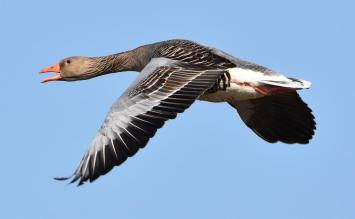 In a kingdom long ago, a Greylag goose lived on an island in the middle of a lake. She built her nest in the reeds, and after eating certain flowers and grasses, she laid an egg made of pure gold.

Every day, the goose ate the same flowers and grasses, and every morning she laid a golden egg until she had a clutch of five eggs. She sat on them all day long, and whenever she left her nest to eat, she covered them with sticks.

One day, a young man rowed his boat to the island. As he walked through the reeds, he saw the goose sitting in her nest.

“Get out of here!” the young man yelled. “I’m taking your eggs.”

The goose stretched out her neck. “No, you’re not!” she cried. “I made them, and they’re mine.”

The young man drew his sword. “Then I’ll have eggs and goose for dinner.”

The young man started waving his sword, and the goose, fearing for her life, flew away.

The goose was so upset at being robbed, she flew straight to the king’s castle. But when the guard took her to the throne room, the king was asleep. After waiting for an hour, she honked until the old man woke up.

“A young thug stole my eggs,” the goose said sadly, bowing before the throne.

The king, whose name was John, shrugged his shoulders. “My people are poor and need to eat.”

“But these aren’t eggs you can eat. They are golden eggs.”

King John’s eyes opened wide, and he ran his fingers through his long grey hair. “Real gold you say?”

“Yes, if I eat the same flowers and grasses each day, I can lay an egg made of pure gold.”

King John thought for a moment; then he ran his fingers through his long grey beard. “I will help you if you help me.”

“You can get my eggs back for me?” the goose asked.

“Probably not,” King John admitted. “But I can protect you from thieves. You can build a nest in the turret of my castle, and my guards will bring you grass and flowers to eat.”

King John smiled. “Only one out of every ten eggs that you lay.”

The goose looked into the king’s eyes. They were dark, swollen, and half-open, and she didn’t know if she could trust him. She thought long and hard; then finally she said, “Okay. One-tenth sounds fair to me.”

And so, King John let the goose live in the turret of his castle where she built the largest nest a goose has ever made. (It was five feet wide and two feet deep.) The guards brought her grass and flowers to eat, and every day she laid a golden egg. She sat on them, stared at them, and sometimes, when no one was looking, kissed them with her beak.

When summer came to an end, the goose had laid one hundred golden eggs, and she gave ten to King John.

The following spring, when the goose started to lay eggs again, she was summoned to see the king. A guard escorted her to the throne room, and after he opened the double doors for her, she bowed her head and walked to the throne.

“My dear goose,” King John said with a smile, “my people are poor, and I need you to give a little bit more to help me provide for them.”

The goose raised her head. “But we agreed to one-tenth.”

“That was last year. Times have changed, and I need you to give a little bit more.”

“How much?” the goose asked.

The goose looked at the guard; then she looked at King John. “What if I say no?”

“Then you can go back to your island and take your chances with thieves.”

The goose loved her eggs, and didn’t want to lose any of them, so she agreed to the king’s terms.

The following spring, the goose was summoned again before the king, and he asked her for one-fourth. And the year after that, one-third.

The fifth year, a guard came to turret and took the goose to see King John. But when she entered the throne room, she did not bow her head.

“Yes, goose,” King John said sternly. “You have much more gold than you need. My people are poor, and I need you to serve the greater good.”

“How much do you want now?” the goose wondered.

The goose thought for a moment, and then she said, “No; that’s too much. I’ve spoken to another king, and he will let me live in his castle for much less.”

“You greedy goose!” King John shouted. “I will not allow this!”

The goose stretched out her neck. “I made my eggs, not you!” she said defiantly. “And I’ll do whatever I want with them.”

King John turned to the guard. “Seize her and lock her up!”

The guard chased the goose around the throne room, but he couldn’t catch her. Then he drew his sword, but she flew over him, escaped the castle and fled to another kingdom.

With the goose gone, King John took all the eggs that the goose left behind, kept a dozen for himself, and used the rest to provide for his people. However, when the gold ran out, the people were just as poor as they were before.