Skip to content
By celebrating a terrorist as a national hero, the Palestinian Authority is encouraging acts of terrorism. 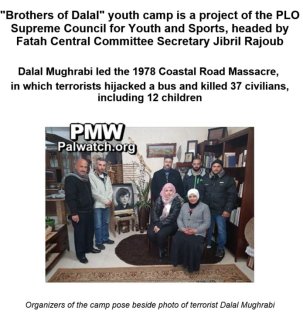 The Palestinian Authority (PA) is the interim “self-governing authority” that represents the Palestinian residents of the West Bank.1 In March 2017, the PA honored Dalal Mughrabi by naming a youth camp in Jericho the “Brothers of Dalal.”2 This is shocking because Mughrabi was a terrorist. By celebrating her as a national hero, the PA is encouraging acts of terrorism.

Dalal Mughrabi took part in the worst terrorist attack in Israeli history. As reported by the Times of Israel, “On March 11, 1978, Mughrabi and several other Fatah terrorists landed on a beach near Tel Aviv, hijacked a bus on Israel’s Coastal Road and killed 38 civilians, 13 of them children, and wounded over 70.”3 Mughrabi was killed by Israeli forces, and following her death, many buildings and streets in the West Bank have been named after her.4

Naming a youth camp after a dead terrorist is an example of moral inversion: declaring evil to be good. A Palestinian Authority official, Ramallah Laila Ghannam, praised the initiative for “remembering the pure-hearted Martyrs.”5 The PA should be condemned by the International Community for honoring Mughrabi. She was a criminal, not a martyr.

Unfortunately, honoring dead terrorists is common practice by the PA. A 2010 report by Palestinian Media Watch (PMW) included “100 examples of places and events named after 46 different terrorists.”6 Instead of condemning Palestinian terrorists for killing Israeli citizens, the PA celebrates them as heroes, even though they killed innocent people.

Honoring and celebrating terrorists sends a message to Palestinians that if you carry out acts of terrorism against Israeli citizens, the PA may one day honor and celebrate you. Naming a youth camp after Mughrabi is a tacit endorsement of terrorism by the PA. They are encouraging Palestinians to follow her example, and do what she did. Further, by calling a dead terrorist a “martyr”, the current leadership of the Palestinian Authority stands for radical Islam. And the goal of radical Islam is to destroy the state of Israel.