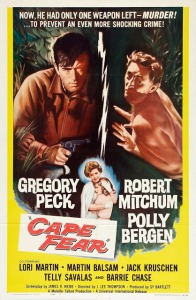 In J. Lee Thompson’s Cape Fear (1962), Max Cady (Robert Mitchum) is not who he appears to be. Outwardly he is an alpha male—calm, confident, and in control. However, beneath his charming exterior, he is a man of violence who feels no remorse for his crimes. Max’s character fits the psychological profile of a psychopath.

Hervey Cleckley’s book, The Mask of Sanity, outlines 16 major traits of psychopaths. Max possesses nearly all of these traits including “absence of nervousness”, “incapacity for love”, “sex life impersonal”, “lack of remorse and shame”, “absence of delusions and other signs of irrational thinking”, “good intelligence”, “failure to follow any life plan”, and “superficial charm.”1

Max’s charming personality makes him appear normal. He often smiles, has a sense of humor, and is outgoing and friendly. His charm also appeals to certain women. When he spots Diane Taylor (Barrie Chase) in a bar, he stares at her, and flirts with her. Max spends the night in jail, but when he sees Diane again, she will succumb to his charms.

Max’s superficial charm is a mask he wears to conceal his violent nature. It is ironic that Diane is attracted to him, yet she knows he is a bad man. In his car, she looks at him with sexual desire and says, “You’re just an animal: coarse, lustful, barbaric.” Later, Max proves her words are true by giving her a severe beating.

When Max believes someone has wronged him, he uses violence as a means of punishment. To punish Sam Bowden (Gregory Peck) for testifying against him, he threatens to kill his daughter Nancy (Lori Martin). Max also punished his wife, who divorced him while he was in prison. Shortly after his release, he forced her to take a trip with him and “occupied her time for three days.” In other words, he raped her repeatedly. Max’s anger has made him unimaginably cruel.

Anger, if left unchecked, can turn to hate, and hatred can lead to violence. Max tells Sam that while he was in prison, “All I could think about was busting out and killing somebody.” The hatred in Max’s heart sparked a desire for violence. Instead of taking responsibility for his crimes, he blames other people. His hatred of those he blames made him inhuman.

Max is frequently described in non-human terms. Peggy Bowden (Polly Bergen) calls him “a beast”; Sam tells him he is a “shocking degenerate”; and Charlie Sievers (Telly Savalas) refers to him as “an animal.” When Max is at the Cape Fear River, he crawls on his stomach like a snake.

Although he is portrayed as half-human, half-animal, Max is not insane: “a mental illness of such a severe nature that a person cannot distinguish fantasy from reality, cannot conduct his affairs due to psychosis, or is subject to uncontrollable impulsive behavior.”2 Max suffers no hallucinations or delusions. He is completely rational, planning his every move with careful calculation.

Neither is Max controlled by violent impulses. When Sam takes a swing at him, he does not fight back. Instead, he says with a smile, “I’ll make my stroke later.” Sam, in contrast, often acts on impulse—in one scene taking a gun from his desk with the intention to murder Max. While Sam often loses control, Max is in complete control. The evil that he does is of his own free will.

Max is a psychopath, and psychopaths are responsible for what they do. The tragedy of Max’s life is that his own thoughts and actions made him what he is. He felt no guilt or remorse for his crimes because his anger and hatred blunted his conscience. Consumed by a desire to punish his enemies, he became a human monster.